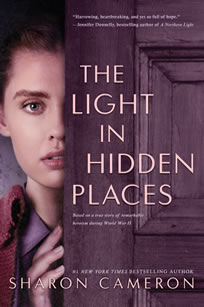 The Light in Hidden Places

One knock at the door, and Stefania has a choice to make…

It is 1943, and for four years, sixteen-year-old Stefania has been working for the Diamant family in their grocery store in Przemsyl, Poland, singing her way into their lives and hearts. She has even made a promise to one of their sons, Izio — a betrothal they must keep secret since she is Catholic and the Diamants are Jewish.

But everything changes when the German army invades Przemsyl. The Diamants are forced into the ghetto, and Stefania is alone in an occupied city, the only one left to care for Helena, her six-year-old sister. And then comes the knock at the door. Izio’s brother Max has jumped from the train headed to a death camp. Stefania and Helena make the extraordinary decision to hide Max, and eventually twelve more Jews. Then they must wait, every day, for the next knock at the door, the one that will mean death. When the knock finally comes, it is two Nazi officers, requisitioning Stefania’s house for the German army.

With two Nazis below, thirteen hidden Jews above, and a little sister by her side, Stefania has one more excruciating choice to make.

Reviews for The Light in Hidden Places

“Beautifully written and meticulously researched, Sharon Cameron captures the extraordinary story of one of history’s hidden heroes. Every devastating moment is both gripping and powerful.”
-Ruta Sepetys, New York Times bestselling author of SALT TO THE SEA

“Harrowing, heartbreaking, an dyet so full of hope, THE LIGHT IN HIDDEN PLACES teaches us that one person truly can make a difference in this world. CLever, bold, and braver than a lion, Stefania Podgórska is a heroine for her age, and ours.”
-Jennifer Donnelly, New York Times bestselling author of STEPSISTER

“Sharon’s work is accurate, her research thorough…Sharon wrote an exciting novel that weaves together the lightheartedness, sheer terror, and incredible inner strength of this young woman, my mom. This book exceeds all my expectations.
-Ed Burzminski, son of Stefania Podgórska 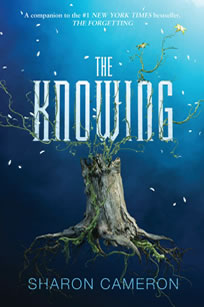 Samara is one of the Knowing, and the Knowing do not forget. Hidden deep in the comfort and splendor of her underground city, a refuge from the menace of a coming Earth, Samara learns what she should have never known and creates a memory so terrible she cannot live with it. So she flees, to Canaan, the lost city of her ancestors, to Forget.

Beckett has flown through the stars to find a dream: Canaan, the most infamous social experiment of Earth’s antiquity. Beckett finds Samara in the ruins of the lost city, and uncovers so much more than he ever bargained for — a challenge to all he’s ever believed in or sworn to. When planets collide and memories clash, can Samara and Beckett save two worlds, and remember love in a place that has forgotten it?

At once thought-provoking and utterly thrilling, this extraordinary companion novel to Sharon Cameron’s #1 New York Times bestselling The Forgetting explores the truth and loss that lie within memory, and the bonds that hold us together.

Reviews for The Knowing

* “Both a politically charged adventure and culture study, this thought-provoking dystopia stands firmly on its own.”
-Booklist, starred review

“Diverse, well-drawn characters abound, but in the riveting power struggles that ensue, women are dominant players, ruthless ideologues willing to sacrifice all that interferes with the goal. The intricately woven narrative threads come together in a suspenseful denouement sure to leave readers hoping for another installment.”
-Kirkus Reviews

“Wildly inventive yet somehow believable. . . . For all of its fantastical elements . . . this companion novel is ultimately a story about two teenagers, Samara and Beckett, finding their places in the world, managing familial and societal expectations, and falling in love. Cameron is a writer of prime caliber.”
-School Library Journal 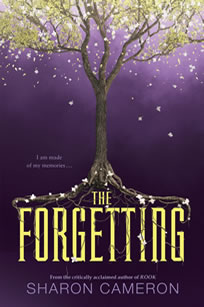 “Nadia lives in the city of Canaan, where life is safe and structured, hemmed in by white stone walls and no memory of what came before. But every twelve years the city descends into the bloody chaos of the Forgetting, a day of no consequences and no remorse, when each person’s memories—of parents, children, love, life, and self—are lost and forgotten. Unless they have been written.

In Canaan, your book is your truth and your identity, and Nadia knows exactly who hasn’t written the truth. Because Nadia is the only person in Canaan who has never forgotten.

But when Nadia begins to use her memories to push beyond the walls and solve the mys­teries of Canaan, she discovers truths about herself and Gray, the handsome and enigmatic glassblower, that will change her world forever. As the anarchy of the next Forgetting approaches, Nadia and Gray must stop an unseen enemy that threatens both their city and their own existence—before the people can forget the truth. And before Gray can forget her.”

From the critically acclaimed author of Rook comes an extraordinary exploration of truth and memory, love and loss, and the story of a young woman who must harness an indomita­ble courage to save her world.

Awards and Reviews for The Forgetting

“The Forgetting is Sharon Cameron’s fourth young adult novel, and she’s grown adept at blurring the lines between fantasy, dystopian and science-fiction genres. Cameron reminds us, through Nadia’s documented memories, that we must learn to appreciate the truth as much as question it, exploring the morality tucked within the fallacy of memory.”
-Bookpage, Top Pick 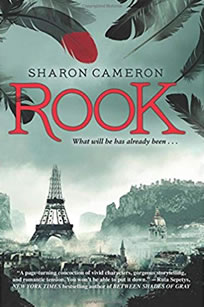 History has a way of repeating itself. In the Sunken City that was once Paris, all who oppose the new revolution are being put to the blade. Except for those who disappear from their prison cells, a red-tipped rook feather left in their place. The mysterious Red Rook is a savior of the innocent, and a criminal in the eyes of the government.

Meanwhile, across the sea in the Commonwealth, Sophia Bellamy’s arranged marriage to the wealthy René Hasard is the last chance to save her family from ruin. But when the search for the Red Rook comes straight to her doorstep, Sophia discovers that her fiancé is not all he seems. Which is only fair, because neither is she.

As the Red Rook grows bolder and the stakes grow ever higher, Sophia and René find themselves locked in a tantalizing game of cat and mouse.

Awards and Reviews for Rook

“The suspense kicks right off in this action-packed tale, quickly wrapping readers up in the drama.”
-Romantic Times

“Cameron crafts a brilliant homage to The Scarlet Pimpernel yet also manages to make her telling unique, particularly in… the many twists, turns, betrayals, and lucky breaks [that] will keep readers breathless until the very end.”
-Bulletin of the Center for Children’s Books

A Spark Unseen (The Dark Unwinding #2)

“This is not how I’d thought I would die. Had not been part of my meticulous plan when I’d pulled on my nightgown and climbed into bed. There were this month’s ledger books waiting on my desk, and the new plastering to start tomorrow in the ruined lower wing. That rent to be mended in my white stockings and the walls of Uncle Tully’s workshop, rising stone by stone from the riverbank…
My eyes flew open, widening at the sting of the knifepoint as it entered my skin. Lane would come back to Stranwyne Keep, and I would not be here to meet him.”

When Katharine Tulman wakes in the middle of the night and accidentally foils a kidnapping attempt on her uncle, she realizes Stranwyne Keep is no longer safe for Uncle Tully and his genius inventions. She flees to Paris, where she hopes to remain undetected and also find the mysterious and handsome Lane, who is suspected to be dead.

But the search for Lane is not easy, and Katharine soon finds herself embroiled in a labyrinth of political intrigue. From the court of Napoleon III to the underground tunnels of Paris, Katharine will have to decide how a dangerous weapon might be kept from both a queen and an emperor, and whom she can trust –if anyone– to help make Uncle Tully safe once and for all.

Katharine Tulman discovers a fantastic world where science seems like magic when she arrives at her uncle’s remote estate to have him committed to a lunatic asylum. But instead of a lunatic she is confronted with a genius inventor with his own set of child-like rules, a brooding apprentice and a mysterious young student of science, the dwindling family fortune and the hundreds of families her uncle is using it to support. Having Uncle Tulman sent to the asylum is no longer an easy choice. And that’s when Katharine Tulman begins seeing things that aren’t really there.

“In the very back of the room, where the sunlight could not penetrate, a wide staircase rose into darkness, and beside the stairs was a door, light leaking from its edges. I opened this, and found a windowless corridor, gaslit and stifling. Door after door slipped past me, set in walls the hue of half-ripened cherries, a sense of suffocation growing as I moved deeper and deeper into the house. A closed door ended the hall, and behind it was another room, also windowless, a single chandelier throwing both illumination and shadow on nothing but clocks.”

Katharine Tulman discovers a fantastic world where science seems like magic when she arrives at her uncle’s remote estate to have him committed to a lunatic asylum. But instead of a lunatic she is confronted with a genius inventor with his own set of child-like rules, a brooding apprentice and a mysterious young student of science, the dwindling family fortune and the hundreds of families her uncle is using it to support. Having Uncle Tulman sent to the asylum is no longer an easy choice. And that’s when Katharine Tulman begins seeing things that aren’t really there.

Reviews for The Dark Unwinding

“By turns funny and poignant, this period mystery is a thoroughgoing delight.”
–Kirkus Reviews